The Hidden Treasures of Murano and Positano

Exhibition and private viewing of the Positano landscape paintings of the famous Nazario Fusco and the Murano glass ‘Homage to Picasso’ sculptures of Mario and Francesco Badioli – sponsored by MuranoGlassItaly.com Murano Glass Gallery.

The ‘The Hidden Treasures of Murano and Positano’ exhibition aims to give insight in the hidden artisan world of contemporary Murano glass making and the wonderful land of Positano. The complementary artworks of Mario Badioli, Francesco Badioli and Nazario Fusco are able to jointly bend things most people see as a straight line. The artworks take the viewer on a wonderful journey that gives an inspiration to the soul.

Nazario Fusco (Positano, 1954) transposes on the canvas an intimate and personal view of his land as only who was born between those lanes and stairs can have. The chief and essential subject of Nazario Fusco’s world and his pictorial research are narrow stairs, quaint lanes, old walls, small doors, asymmetric windows, and houses with domed or round roofs that seems to give us a different and unusual image of Positano. The paintings of Nazario Fusco perfectly convey a feeling of truth and of a deeper attachment to a so old and respectable land; they are the witness of his strong need to return to his roots. 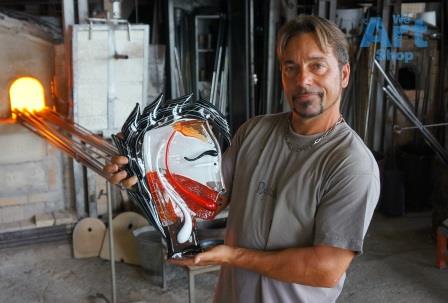 Mario Badioli (Murano, 1940) and his son Francesco Badioli (Murano, 1969) are one of the most passionate and innovative contemporary glass artists in Murano, Italy. In the last century glass artists in Murano through experimentation discovered new ways of mastering the glass. Mario and Francesco Badioli discovered new shores through playing with sand and fire creating a universal language of art glass. Their artistic creations give body to the imagination through spectacular colors and shapes. Mario and Francesco Badioli are visionaries, who like to test their own limits and push their boundaries. In 2014 they decided to collaborate with MuranoGlassItaly in order to display their masterpieces to a wider audience.

Social
« Why and where to buy Murano glass, what is so special about it?
Buy Murano Glass by Francesco and Mario Badioli »