Glass master Imperio Rossi was born in 1951 in the island of Murano, Italy. Following the footsteps of his father he started at the young age of 13 working at a furnace to become a glass master. In 1986 he decided to follow his dreams and establish his own artisian furnace.

In the beginnings Imperio Rossi focused on the creation of handcrafted vases, plates and special gifts, the so called “bomboniere”. As time passed by he turned his focus towards a unique glass artisan technique, Millefiori.

Millefiori can be described as a playful game between the traditional solid or blown glass and colorful murrine techniques. Millefiori allows the imagination of the glass master to create wonderful forms and shapes, which embody a perfect balance between the passionate liquid glass and the precise solid murrine. 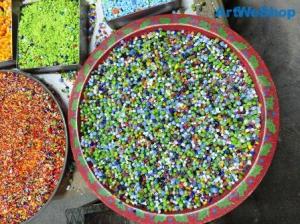 In 2014 Imperio Rossi decided to collaboarte with MuranoGlassItaly in order to showcase his art glass creations to a wider audince. Now you have the chance not only to visit one of Imperio Rossi”s exhibitions in New York or Tokyo, but to have a unique Millefiori masterpiece in your own home decor.